Welcome to the Hiphop Chess Club. I arrived a little early last Monday but it gave me a chance to meet the people who made this happen before the players began arriving. The HCC has been meeting in the Southside Smoothie on Prairie Avenue for about 3 months now.

Seen here, seated at the table, are club director Eric Mercado, who has been playing chess for close to 30 years, and Edwin (Eddie) Fernandez, the owner of Southside Smoothie. Behind the counter is Eric’s son, Elishua Mercado, who was kind enough to make me a yummy Caribbean Blast.

The chess club idea came out of a twice-weekly after-school program Eric organized down the street at the SouthSide Elementary Charter School. Following the quarantine hiatus, they relaunched the club, landing briefly at La Broa Pizza before settling in at the present location. This new incarnation is open to ages 8 years and up. Their social media photos show a mix of kids, teens, and young adults.

What are the benefits of this activity? “Chess has been persuasively linked with improving children’s concentration, problem-solving, critical, original and creative thinking — and even mathematical abilities. It is also said to help with memory storage and how young brains manage information.” And it gets kids away from the screens. As Eddie put it, “Let’s put the phones aside for a second, let’s talk, let’s interact.” Amen to that.

And yes, music was playing during my visit . . . Eminem actually (guess who’s back). But the chess club schedule includes live music, a steady producer lineup “with some of the region’s best beat makers.”

Southside Smoothie is Eddie’s labor of love. He has the shop stocked with herbal supplements like sea moss, and the Organic Vibes product and merch lines. He enthuses about the smoothie bar . . . and everything really. This is just a fun hang whether you are playing chess or not. They also host Freestyle Fridays, which often spills out onto the sidewalk, as well as Money Talk Tuesdays, “learning about money and how to make it work for you.”

Overall, these guys seem to be a force for good in the world: chess? health food? money management? But apparently there is another side to this mild-mannered chess club director: an alter-ego by the name of Eric “Krook Rock” Mercado who is making some pretty amazing music, which these guys didn’t even tell me about. (We did do a lot of talking though.) Go watch at the Organic Vibes page.

Ages 8+. More info at their FB page and Instagram. If you have an old chess set gathering dust, why not drop it off. Also, the HCC is a 501 (C)(3) nonprofit so donations are non-taxable. Also, they are collecting donations of outerwear and coats etc. for distribution to those in need this winter. They are open seven days. 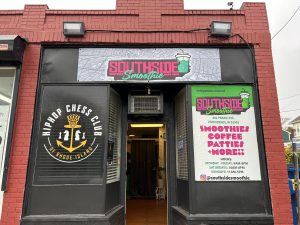