Ragnar! This image caught my attention before I even saw the title, “Ragnar Lodbrok.” Andrew Mignacca’s oil painting is part of this month’s exhibition in the AS220 Main Gallery, up now through November 26. The galleries are open Thursday through Saturday from noon to 5pm, or by appointment.

Everything I know about Viking chieftain and raider, Ragnar Lothbrok, I learned from the television series “Vikings,” where he was a blond. But I now see that Mr. Mignacca executed this painting one year prior to the debut of the series, so that would not have been an influence. Perhaps the artist has read the Icelandic sagas, or actually knows a young man with this name. Mystery is good. What I want Mr. Mignacca to know is that his work evoked an audible response from this viewer who yelled “Ragnar” to an empty gallery. The piece works no matter the inspiration; I like it a lot.

Also in the Main Gallery is the work of Katya Ginzburg-Bram: “Snapshots from a Family Album” is mixed media on cardboard. 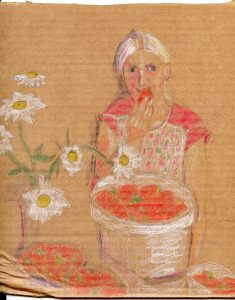