“My advice is, if you don’t like the way it looks, look in a different direction.” This was developer Jason Fane’s charm offensive three years ago when addressing the concerns of city residents who questioned the location of this oversized “luxury” condo tower. Now Fane has submitted this “new” design to the 195 Redevelopment District Commission, and the changes are all consistent with financing problems (the balconies have been scrapped; two levels of parking garage are to be apartments).

Patrick Anderson writes in the ProJo:

. . . the Fane Organization expects to go before the 195 Redevelopment District Commission, which owns the land the tower would be built in, for approval of the new design in January.

In the years since 2016, Fane has . . . received multiple extensions on the deadline to purchase the site from the state. The current deadline to buy the state-owned project site for $3.2 million is at the end of March, although the developer has a 60-day extension option. To meet that deadline, Fane has to be able to show a construction contract in place for the building and the financing (both debt and equity) to pay for that contract.

(Emphasis mine.) If that proof is indeed mandatory, it may be the end of this whole thing. We’ll see if the RDC waffles once again. Why would we even want to be in business with this man? He has been yanking our chain for years now. From that WPRI report (9.25.19):

Letters obtained by Target 12 in July show Fane also didn’t deliver key documents and monetary commitments to the commission in a timely fashion. The commission has repeatedly extended a deadline for the developer to submit a tax-stabilization agreement with the city, another key milestone in the development process.

We will notify you about the January RDC meeting. Meanwhile, take a look at this opinion piece by Gabriel Sender of the Brown Daily Herald concerning the very problematic RDC:

The committee currently meets once a month publicly at 5 p.m. on Zoom. This is a deeply problematic practice for a number of reasons, though one that is certainly not unique to the I-195 Commission. Firstly, a once-a-month meeting seems insufficient for accurately gauging community input on various development proposals, especially when there have already been vocal objectors in the community. Secondly, 5 p.m. is a particularly poor time to hold a community meeting. This is during rush hour, when many people are just getting off of work, or when others are sitting down for dinner, picking up children or running other errands. Placing a community meeting at 5 p.m. then excludes a vast number of residents from having a chance to contribute to the discussion, allowing only those with significant free time to do so.

Public comment in every recent meeting of the I-195 Commission has been limited to 15 minutes total. Each member of the community is allowed to speak for three minutes at most, and they only have the opportunity to do so if they email the committee in advance. This callousness is in sharp contrast with willingness the commission has shown to accommodate developers. In the case of Fane Tower, the committee has extended multiple deadlines for the developer after numerous delays.

Gabe Sender is in the Brown class of 2025; I hope he sticks around. 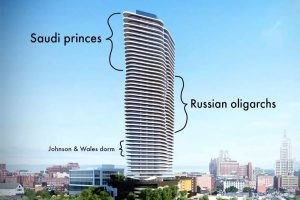 The prior design with amusing notations. 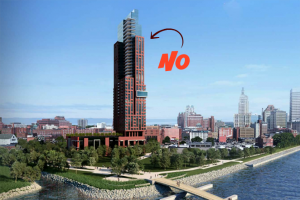 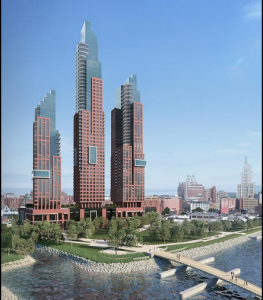