In 2014, citizen Brett P. Smiley removed himself from the Providence mayoral race, throwing his support to Jorge Elorza; his goal was to prevent the odious Vincent “Buddy” Cianci from being re-elected (ProJo 8.22.14). Cianci had been running as an independent after serving a prison term for conspiring in city hall corruption, and he wanted back in. At the sentencing, Judge Torres determined that Cianci “was mayor of an administration that was corrupt at all levels.” (NYT obit)

So why on earth is his portrait still front-and-center in the fabulous Aldermen Chambers, in the very building that he ran as a “criminal enterprise”?

Add to that the very credible accusations of domestic abuse revealed by his ex-wife Sheila Bentley in an interview with Amanda Milkovits of the Boston Globe in 2019.

She remembered the night a friend and a local doctor helped conceal a bruise from when Cianci hit her face, so it wouldn’t be noticeable during the swearing-in for his second term.

Lovely. I first addressed this issue at the time of the Bentley interview, suggesting the painting be replaced by a portrait of turn-of-the-century mayor, Daniel Granger, whose reputation was spotless. Although, former Mayor (now Congressman making us all proud) David Cicilline has a portrait, it would be a little casual for the room. (Don’t even think about elevating that guy on the right; Paolino was supporting the felon till the end.) I’m still pretty high on Granger.

My message to Mayor Smiley . . . thank you for that selfless act eight years ago. You really may have made the difference, and Providence did not return to “the dark days of the past.” But this portrait has got to go. At least move it to some other floor. People get married in this room . . . under the creepy gaze of a wife-beater!

You don’t have to make a big deal of this, but now is the time. Four years from now, no one will remember what happened in 2023. Don’t even announce it . . . just do it. If anybody asks, just says it’s out getting cleaned. Frankly, given your past connection to this saga, I’m surprised you haven’t done it already!

(Note: The witness who was pivotal in bringing down the mayor and his cohort, Tony Freitas, has just recently died. The people of Providence owe him an enormous debt of gratitude. He should have a portrait.) 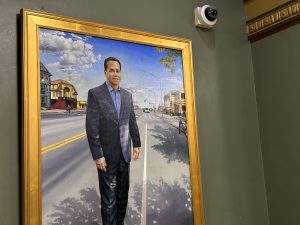 Former Mayor David Cicilline on Atwells Avenue I think. This might look a little odd in the Aldermen Chamber. Granger it is.