One of the Providence Athenaeum’s most notable visitors was Edgar Allan Poe. In 1848 he traveled to the city in order to meet and court the wealthy widow and talented poet, Sarah Helen Whitman, with whom he happened to share a birthday, January 19th. She had once written a poem to Poe, to be shared with him in the company of a literary gathering, referencing his most famous work, “The Raven.” (That didn’t come to pass; that group did not enjoy his company so much.) Poe had sent several anonymous poems to Helen (including “To Helen” that recounted his accidental sighting of her in her Providence home’s garden three years earlier), before the two met in September.

Unfortunately, Poe’s drinking and turbulent behavior soon caused problems. Worse, her friends did not approve of the match. And so, despite their shared love of poetry, she ended the relationship. Some of this courtship took place in one of her favorite haunts, the Providence Athenaeum. The library has portraits of the two in the Art Room — ask at the front desk — and one very special volume. The courtship began with that exchange of poems, and goes on to include one of the most romantic moments two writers could ever have. If they had ever considered their shared birthday a sign from the cosmos, this must have sealed the deal. More from the library’s history of the failed romance:

After several meetings, Poe proposed to Whitman in a local cemetery. She eventually accepted, but their engagement was troubled, and both parties (Whitman in particular) were counseled to break off the match by friends and family. Whitman even wrote to Poe days after their first meeting to directly refuse his proposal, but he eventually convinced her to marry him with a series of impassioned love letters, promises of sobriety, and various visits. It was during one of these trips to Providence that the couple spent time together in the Athenæum, and Whitman showed Poe a new interesting poem called “Ulalume,” published anonymously in the library’s copy of the American Whig Review (December 1847). Poe revealed himself as the author and signed his name in pencil next to the poem.

That volume, with the signature, is in the library’s collection.

Whitman lived in the house which is now number 88 Benefit Street; the house is still there and it abuts a church cemetery. She outlived Poe by decades and, according to the library, “In spite of their relationship’s unhappy conclusion, Whitman continued to advocate for Poe’s work both nationally and abroad throughout her life.” Very cool.

The library is open to the public, but membership comes with many benefits, author salons for instance. Click on that page and you will see one of them . . . Colson!

And everyone is welcome to browse in the new gift shop on the first floor. 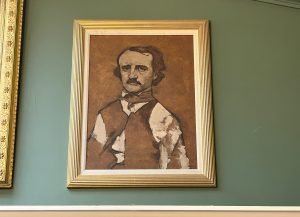 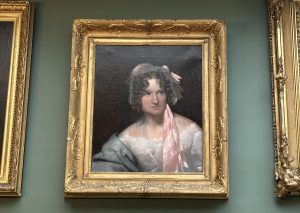 Portraits in the Art Room. 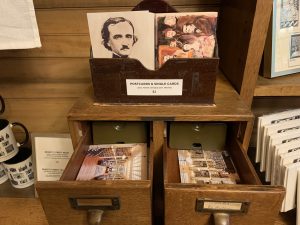 (The featured bust is above the door on the first floor. Look up.)