It is impossible to overstate the penetration of “The Raven” into American culture. It’s still the only poem with its own NFL football team, the Baltimore Ravens. That is where Edgar Allen Poe died and is buried. But just one year prior to his sad and mysterious end, he had visited Providence to pursue a love interest; that brought him to the Providence Athenaeum, which is where one finds this specimen. Robin Wetherill, a director at the library, was kind enough to answer my questions about the bird’s provenance.

First off, this beguiling ebony bird is not a raven. It’s a crow.

. . . it was gifted to us as a raven (we had some folks at the [RISD] Nature Lab check it out to confirm). A member . . . donated it to the library in 2011, after acquiring it in Hawaii in the 1980s. It once was part of the collection of the now defunct Museum Macabre in Honolulu. It was repaired and mounted by taxidermist Brian Yanico in 2015, and the gorgeous 19th-century glass cloche that just happened to fit it perfectly was acquired from Old as Adam Antiques on Benefit Street.

I have no problem with the substitution . . . same genus. And now that old Hawaiian crow has pride of place in the Athenaeum’s Art Room, on a gorgeous table inlaid with mother-of-pearl.

The library does lean into the whole raven thing, and why not. 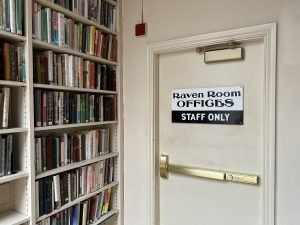 In 2019, the library held a Poe exhibition, “Ravenous,” which featured a 1884 edition of “The Raven” illustrated by Gustave Doré and much more. 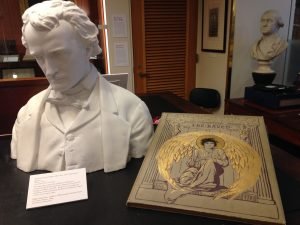