This could be kind of great. The new Pawtucket-Central Falls station on the MBTA commuter line is near to Pawtucket’s center and ten RIPTA bus lines stop at the station, including the R-Line (fare is free on the R-Line now through July 1st). It would be a short walk from the Pine Street location to, say, Machines With Magnets. Patrick Anderson wrote up yesterday’s opening ceremony for the ProJo, including the all-important how much? and how long?

An MBTA ticket between Pawtucket and Providence costs $2.75. Pawtucket to T.F. Green International Airport costs $3.25, and to get to Boston’s South Station costs $12.25.

The trip from Providence to Pawtucket took six minutes. A ride from Pawtucket to South Station is scheduled to take around an hour and 10 minutes, assuming there are no delays.

An amenity center is in the works; for now there are only portable toilets. (Unknown if that colored orb is illuminated at night.)

Details and history of project at RIDOT.

The additional commuter rail station at Pawtucket-Central Falls will supplement three other stations (Providence, T.F. Green and Wickford Junction) serviced by the MBTA, with numerous stops in Massachusetts on the route to South Station in Boston. MBTA will make 40 weekday stops and 18 weekend stops at the new Transit Center.

Paul Edward Parker writes about the potential economic impact of this project.

I found the station fairly easily, even with Pawtucket’s idiosyncratic “street grid.” Look for these plum colored signs. There are two entrances on Pine Street. The left goes to the parking lot, and the right is for drop-offs and bus stops. It’s quite straightforward. 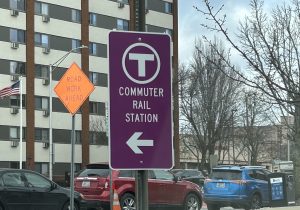