(9.25) Unpack your umlauts, it’s time for singing and dancing and beer outside in a biergarten or indoors in a bierhalle. Tickets are still available for this weekend’s Oktoberfest at the German American Cultural Society of RI just over the line in Pawtucket. Go here for the lineup of beers that will be on tap, or, vom Faß as they say. I assume that the club holds this Oktoberfest in September so that the regulars can decamp to Germany in October.

The German American Cultural Society of today was created in 1998 when the German Dramatic Society of Olneyville and the Eintracht Singing Society of Pawtucket came together to form the new organization.

Both of the original groups had been created over 100 years ago by German immigrants to serve the needs of the German community and were chartered in Rhode Island as cultural/social societies.

Saturday’s opening ceremony is at 1:30 pm. The Vagabonds take the stage from 1 to 5. Bavarian Brothers will be performing from 6pm to 10 (all live music in the main Bierhalle).

On Sunday, the Bavarian Bros will take the stage in the main Bierhalle from Noon to 4pm.

Purchase your tickets online for $10 in advance or $12 at the door. Children under 12 free. Follow on FB.

The interior of this place is kind of perfect, with flags and banners and Bavarian murals behind the bar. 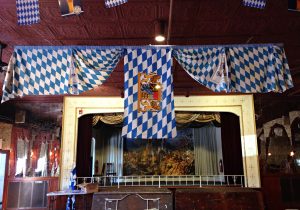 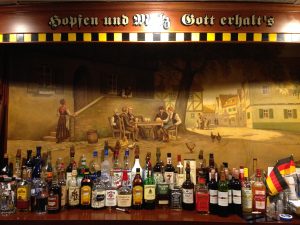