This 1884 edition of “The Raven” illustrated by Gustave Doré is just one of the gems in Ravenous: The Enduring Legacy of Poe, the new exhibit at the Providence Athenaeum. Poe hair!

Highlights from the Athenæum’s collection include Poe’s signature, a portrait of Sarah Helen Whitman, a print of Le Corbeau “The Raven” by Édouard Manet which was inscribed to Whitman by Stéphane Mallarmé, and numerous first editions by Poe and other memorabilia. On view alongside the Athenæum’s collection will be over thirty items on loan from the world-renowned Poe collection of Susan Jaffe Tane, including early newspaper printings and contemporary parodies of “The Raven,” as well as art work, music, and other ephemera of modern pop culture. Other loaned items include a lock of Poe’s hair (John Hay Library, Brown University), a taxidermy corvus (RISD’S Nature Lab), and a rare plaster bust (Levi Leland, private collector).

There is a lot to take in here. And that legacy thing is on full display in the case by the door with a Poe action figure, a bobble-head doll, a skateboard deck, Simpsons figures from the very first Treehouse of Horror, the Lou Reed cd, the dvd of “The Raven” starring John Cusack (which must have been pretty bad because I never heard of it), and a fantastic Scrabble-related New Yorker cartoon. I don’t believe I saw anything from the Baltimore Ravens which is a pity; I love the idea that a football team is named for a poem.

The space that Poe has come to occupy in contemporary popular culture is remarkable; he certainly belongs in the pantheon of American literature. No less an authority than Sir Arthur Conan Doyle insisted, “Each [of Poe’s detective stories] is a root from which a whole literature has developed…. Where was the detective story until Poe breathed the breath of life into it?”

Tuesdays and Thursdays, 12-6pm
Saturdays, 1:30-3:30pm
Other times by appointment 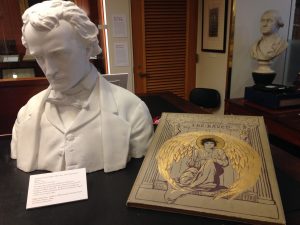