When Shep Fairey arrived last October to install another mural and help AS220 with some fundraising, he had an opportunity to catch up with friends from his days at RISD, many of whom are still in town.

And what could be better than returning to your old college stomping grounds and one of your old classmates owns the best pizza joint in town!

Nice Slice owner Al Read benefited from the connection, getting that fabulous Angela Davis mural for the original shop (it has moved from the Thayer Street location to the new spot).

So naturally, last October some friends gathered at Nice Slice and between the beer and the pizza . . .  art happened. Mr. Fairey slapped a new “Obey” piece up on the interior and a lovely lacy bird medallion out back (see below).

Head over and check it out, and while you’re waiting for your pizza — I love that ricotta — get lost in Mr. Read’s vast collection of music posters.

Gift giving idea: Some nice T-shirts for sale including that great Thayer/Slayer spoof. Also, Frog & Toad is just a block down the street. 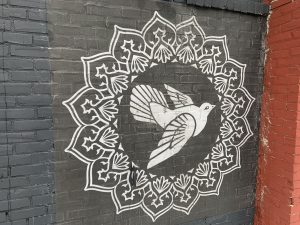 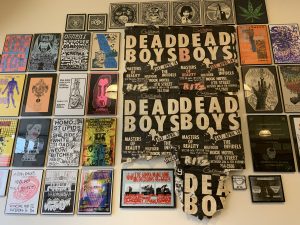