At a press conference this afternoon Governor McKee announced plans for the historic preservation and rehabilitation of the Industrial Trust Building (1928), aka the Superman Building. The Providence Preservation Society (PPS) had reason to be particularly excited by today’s news as they have been advocating for the preservation and adaptive reuse of the Superman Building for nearly a decade, regularly featuring it at the top of their list of Most Endangered Properties. Let’s take a moment to celebrate; this enormous empty tower has been haunting our skyline for long enough. (I’ll bet the peregrines and the ASRI are relieved as well.) From the PPS statement today:

The skyscraper will be converted into 285 housing units (20% of which will be affordable or below market-rate), commercial office space, and mixed use space in the historic banking hall. The $220 million project is a hybrid of financing from developer High Rock, alongside city, state, and federal funding, and others. In recent years, other cities have taken similar approaches to preserving their historic 20th-century skyscrapers, and we know Superman too will be a nationally celebrated achievement.

The total cost of the project is estimated at just over $220 million, according to a signed term sheet between the parties. Zach Darrow, a lawyer for building owner High Rock Development, said the goal is to begin demolition within five to six months and complete the project over two-and-a-half years.

I think the PPS speaks for us all,” Vacant for nine years today, it is only fitting that on its vacancy anniversary, the iconic Art Deco building will have life breathed into it once again.”

You know who takes much better photographs of the Superman Building than I do? Peter Green of Providence Raptors. You can purchase “111 photographs of 111 Westminster Street” for your own wall. Or a tote! 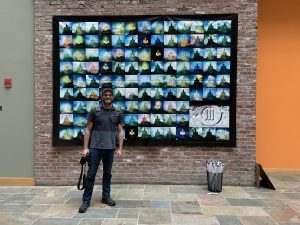 1 thought on “Superman Building To Be Saved”