It’s that time of year again: time to return to standard time; time for early sunsets; time for changing into “lounge wear” at 5pm; and time for our perennial discussion of eliminating daylight saving time altogether. Or, as a Senate bill passed last March would have it, making it permanent. According to the WashPo:

A bill to permanently “spring forward” has been stalled in Congress for more than seven months, as lawmakers trade jabs over whether the Senate should have passed the legislation at all. House officials say they’ve been deluged by voters with split opinions and warnings from sleep specialists who insist that adopting permanent standard time instead would be healthier, and congressional leaders admit they just don’t know what to do.

I don’t think that is going anywhere soon. In the meantime, don’t forget to set your clocks back one hour tonight (2am, Sunday, November 6) before going to bed.

The clock in the RISD Fleet Library came with the building.

In the summer of 2006 the Library moved into a new facility in the first two floors of the former Rhode Island Hospital Trust bank at 15 Westminster Street directly across the river from the RISD Auditorium.

The magnificent banking hall serves as the library’s main reading room, while the second floor accommodates a new reading room for Archives and Special Collections as well as expanded space for the Materials and Picture Collections.

The upper floors are a RISD dorm. One of the benefits of being a member of the Providence Athenaeum is having access to this library.

For the official, exactly precise, government time, go to the National Institute of Standards and Technology (NIST) page. I am not sure if this is a new feature, but on the top right of the homepage is a box telling me that the time on my device is “off by -0.024 s!” This computer is brand new! This is intolerable. 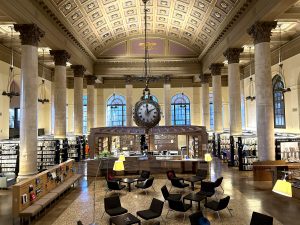